At the beginning of my task I made a couple of irreversible decisions - firstly how I was going to base the entire set (more about that another time) and second that I would use non metallic metals - even though I have limited experience with this method. Several of the pieces I have painted so far are complete with the exception of base details and finishing the metal parts.
I had a nice block of undisturbed time to paint recently and decided to put some real effort into NMM
In the pictures below my vintage minotaur (FF47) is holding a plastic dwarf axe – his own axe probably was lost in late 80’s. I've seen many axeless copies of this figure around so I know mine is not the only one in this condition. I'm not a purist so the plastic axe is pinned and staying.
I painted the axe plain medium metallic silver, shone a light on it and photographed it: 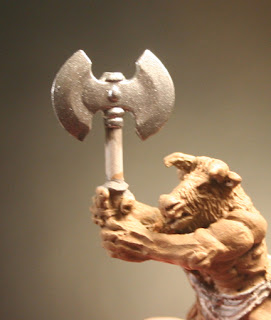 Then, in Photoshop, I pulled the colors out: 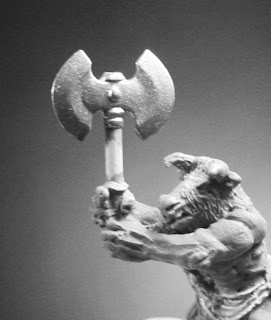 And used a 7 stage cutout filter to simplify: 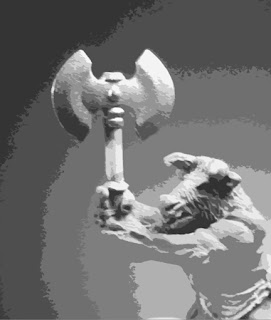 So now I have a NMM PBN – paint by numbers – Which I did: 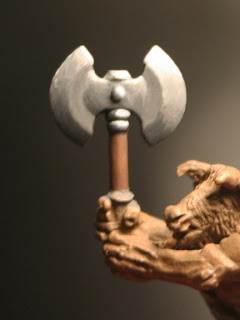 With a flat light, a flash, and some contrast adjustment you can see my brush strokes: 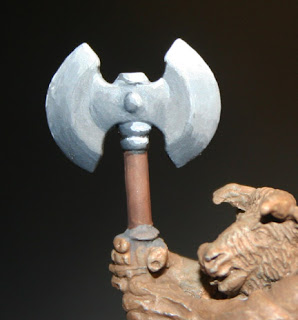 On the reverse, for comparison, I used the MNNM method – using dark to light metallic paint in the same pattern. 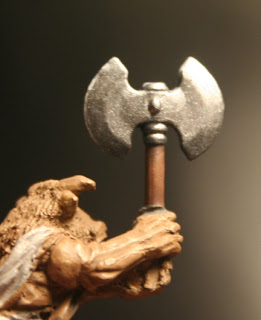 In this case, of the two, I like the NMM best
But PBN NMM cannot be used on every subject - proof below
At the same time I tried a far more complex subject – an fully armoured paladin in a dynamic pose (FF10).
To make matters worse this 25mm fig is a rough sculpt by today’s standard. 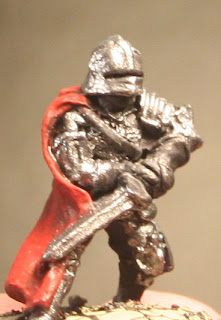 Taking it through a similar photoshop process: 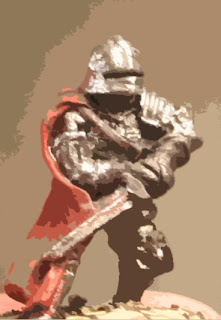 This is what I’m aiming for with warm grays for steel: 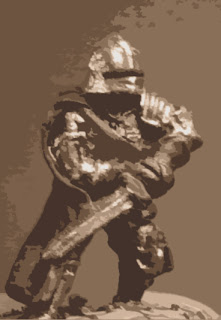 And this is a very quick paint job (Because I very quickly didn’t like where it was going): 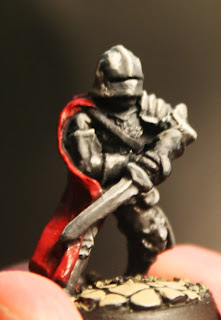 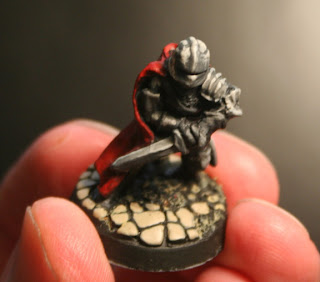 So In this case I’ll have to use artistic licence and fake it – I’ll let you know how that goes
Cheers
C
Posted by Caius at 11:02 PM 1 comment:

Wow – when I’m at a decent monitor instead of my laptop my pictures are huge – note to self.
Speaking of huge
Having lived in Illinois for 20 years I’ve come to terms with much of the insect life I had not encountered growing up in the UK. Bright green katydids and mantises the size of my thumb, cicadas that fill the night with deafening buzz, cicada hunter wasps that look like they could carry of small humans and sound like a helicopter.
But. . . last week I found the biggest spider I have ever encountered without the benefit of interceding terrarium glazing. Its body was pretty much exactly the same size as FF49 but the six remaining legs were much much longer. And it was fast too – very fast – just like Molly thinks Shelob should have been in Return of the King.
So here is FF49 – first of the large critters to get completed 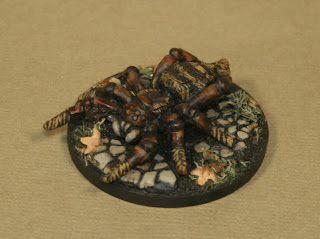 There are others getting close to done: 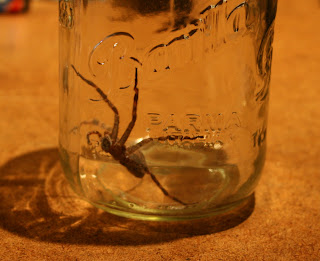 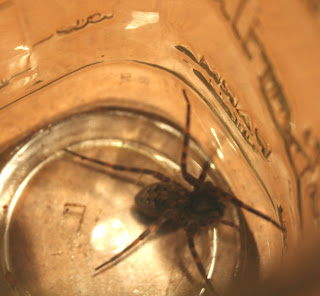 Email ThisBlogThis!Share to TwitterShare to FacebookShare to Pinterest
New Year’s Resolution 2011: I will paint an average of one pre-slotta figure per week.
So by the end of the year I will have at least 52 newly painted, matching miniatures from the Citadel FF/FA/FS ranges.
Why?
I have been gently acquiring 25-28mm fantasy miniatures for 31 years, mostly Citadel but there are lots of others. I would not describe myself as avid or obsessed but only because I know people who are far worse than me - their collections make mine look modest, almost sensible.
I really enjoy painting miniatures and for many years have pretended to myself that I am a painter and a gamer not a "collector". This assertion is publicly sustainable because over the last decade I have painted some very nice Warhammer armies and had the pleasure of having them appreciated (and then usually defeated) at Adepticon in Chicago. However the many trays of mismatched lead monsters and adventurers on my shelves have been much loved but untouched for years.
So I have stripped away the brightly hued Humbrol and Airfix enamels that were applied 30 years ago (often the same day that the figs were purchased) and I am starting over.
Ok  - its now June but I didn’t have a blog started or anything much to show until now
I am on track to keep my resolution (57 figures based, several finished, and many of them more than 50% done) but there is a degree of discipline required to keep on target – so I figure the extra effort of keeping up a blog as well will help.
I'll try to keep it more interesting than "this is what I just finished"
Cheers
Caius
Here, starting at the very beginning, are the first versions FA1, FA2 and FA3 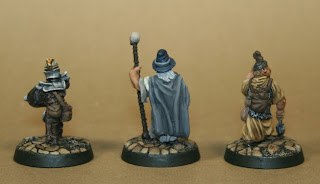 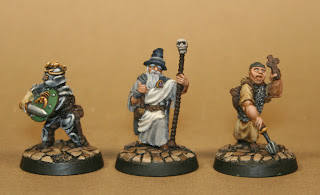