My new year's resolution for 2011 was to paint an average of 1 Citadel preslotta figure per week for a total of 52. I reached that goal in November which is just as well because in December I have been to busy with a combination of work and holiday stuff to paint. Note to self for next year: A lot of December gets taken up with decorating and shopping (searching Ebay for things for other people instead of old lead is so strange).

So goal for next year - 100 more to add to the collection below. Nearly doubling the amount is a challenge but I feel like I'm finding my painting rhythm and the FS dungeon floor tiles and furniture and groups of similar figs like Red Orcs and Fantasy Tribe skeletons should make it do-able, particularly now I have my basing system sorted out. Besides 52 figures didn't make much of a dent in the lead mountain and I'd really like to fool myself into thinking that its getting smaller.

Merry Christmas all, and success in your painting projects for 2012 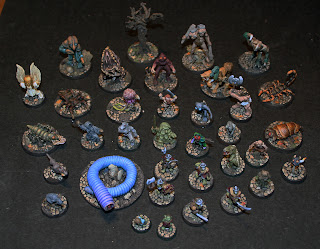 Add the two FS wizards on thrones for 52
And so to battle: 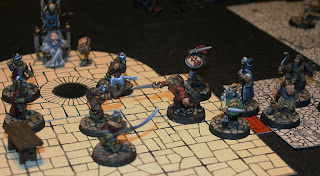 Cardboard dungeon floor is holding up nearly as well as the lead
Posted by Caius at 11:05 PM 7 comments: