FF50 Giant Scorpion, FF51 Tentacled Crawler and FF9-1 Carbuncle - an armadillo like creature with a giant ruby in its forehead  from South American myth apparently (and not as I believed until a few minutes ago just something from White Dwarf and later Fiend Folio - at least according to Wikipedia) 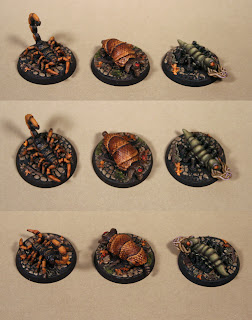 Actually I thought I'd also finished three undead from the FF series too - but looking at the pictures there is significant clean up and blending still to do. There is nothing like seeing your work at 5 x actual size under stark lighting to show how careless and lazy you are.

Caius
Posted by Caius at 3:11 PM No comments: