So Many Projects - a resolution update.

Its 2022 so my resolution to paint, on average, one pre-slotta Citadel miniature every week is now eleven years old.  This blog has received around 100,000 hits which seems surreal when you think this is only the 45th post - so an average of 4 posts per year (but with 18 posts in the first year the average is really more like only 2.5).  My resolution worked, I stuck with it and have painted and consistently based well over 600 old Citadel figs.

Having put some energy into clearing the paint table for the end of the year, it is already getting crowded this week as I'm basing a couple of this years projects at once: 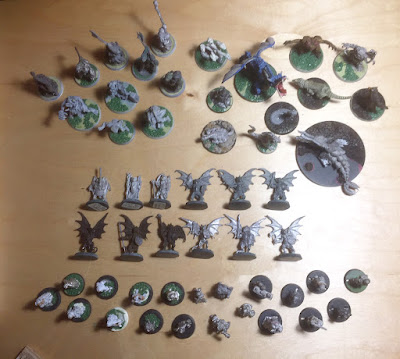 The batch I'm basing are mostly Grenadier and I'm putting in the 12 Fantasy Lords Dragon Men - lovely figs with loads of character who deserve better than the turquoise wash I gave them years ago.

Speaking of monsters I've painted quite a few C series monsters that have not made it into the blog so I'll put in a group shot at the end so this post in not completely devoid of new painted pictures.

I have been working through the fantasy tribes sets - Orcs, Dwarves, Skeletons, Zombies, and Gnolls - and getting into the C series where there are overlaps - Those 5 sets have the consistent feature of multiple figures with the same pose. I'm going to use that as an excuse to put off the fighters till the C series. But the trolls do fit ,with Tom Meier's 6 contributions working from two basic figure poses. So I'm basing trolls for paint this year.

Between multiple manufactures I have enough of these to populate a real village. They have always been a favorite to collect and they have been neglected for decades. The majority of them are not Citadel, and those that are are slotta based, so this project does not skew the year towards my annual resolution goal.

Its been zero days since my last treasure chest/doorway/table and I have no intention of stopping this binge. But I do want to paint all the vintage metal and resin pieces before I get further into the wonderful stuff coming out of my printer. But 99% of my Citadel stuff is done - so again, not helping find the 42 Citadel pieces after the Trolls.

So to round out the projects for 2022 with early Citadel my initial choices are:

Early Goblins ("FTN", fanatics, chaos mutants, whatever I can find)

We will see which one or two of these, or if something else, grabs my imagination this year. Or if I really get into the villagers I might just decide 11 years was a pretty good run. 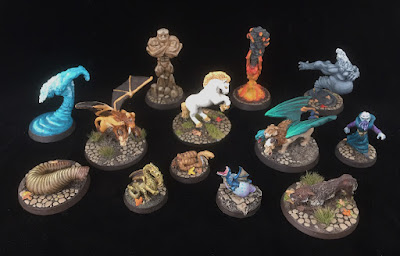