I set myself a goal of painting the WF range in one month - including basing.

The only significant distraction was losing a week or so to carefully gluing several hundred rhinestones on my daughters prom dress.

I have had many of these characterful miniatures since I could by them in baggies at the local toy store. The last few, released in the US by Ral Partha can be harder to find.

I suppose that if you are not really old, and particularly if you are also not from the UK, this range may need a few explanations.

The Aardvarks are a (presumably unlicensed) representation of the comic book character Cerebus created by Dave Sim.   https://en.wikipedia.org/wiki/Cerebus_the_Aardvark 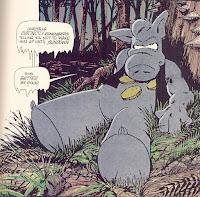 The General Manager WF6 and the Midland Troll WF16 are in the likeness of Bryan Ansell the manager of Citadel Miniatures (pictured below). 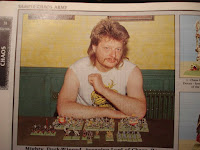 The Skin Golem WF7 is nicknamed Gumby after a character in the TV show Monty Python. 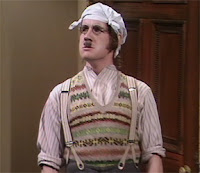 And finally the Dwarf with No Name:
The Man with No Name is the protagonist portrayed by Clint Eastwood in Sergio Leone's "Dollars Trilogy" of Spaghetti Western films: A Fistful of Dollars (1964), For a Few Dollars More (1965) and The Good, the Bad and the Ugly (1966). He is easily recognizable due to his iconic hat, poncho, fondness for cigarillos and the fact that he rarely talks. 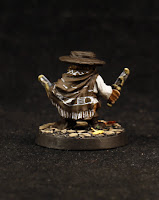 If there are other details I've missed, I'd love top hear about them.
Posted by Caius at 5:47 PM 5 comments: