This week I participated in a couple of figure projects that don't fit with the theme of this blog.

First I completed and entered a figure for the WAMP site's Hasslefree competition. I have had the Geisha fig for a couple of years and the competition seemed like a good vehicle for getting her painted.

Then this weekend, which was possibly the most beautiful weather we have had all year, I spent all day both days in a classroom at games Plus in Chicago taking a masterclass with Mathieu Fontaine.

The class used a plastic GW Ogre to demonstrate a number of concepts and techniques. I learned a lot despite my many many years painting. It was also interesting so see 17 painters lined up with their kit, vision aids, and lamps.

My ogre isn't finished - we did pants and skin one day, faces and metals the next - with a lot of discussion of technique and color theory mixed in - so the hair, belt, boots, and fist are only base coated really.  I should also credit that the right eye on my ogre was painted by Mathieu.

On a final note Games Plus in Mt Prospect is possibly the best game store I have visited in many many years. The selection of miniatures is outstanding with full display racks of many ranges and manufacturers I have only seen on line.

Ok - I was planning to do this at some point anyway - and Glassboy asked. So this week is all about how I am basing these pre-slotta miniatures. (Besides I have been distracted by a couple of side projects this week including a Hasslefree geisha for the Wamp competition).

The answer is - the most ridiculously complicated way possible.

When I first painted these minis 30 years ago - I painted the bases a middle grey and called it good.

The they got glued onto plastic slotta bases, I filled the edges with milliput, covered with flock and a sprinkling of rough sand or cat litter, and I painted the plastic edges dark brown. I still have several armies based this way that look quite handsome.

Then came Adepticon paint judging which gave extra points for base effort and my goblins sprouted handmade pumpkins, and my empire army painted flagstones.

At the outset of this project I decided to base them all with greenstuff cobblestones. The first 20 or so FA figs had their bases filed as flat as they would go and I sculpted each base with a thin layer of greenstuff cobblestones and left some gaps which I filled with sand. However I did not relish the prospect of sculpting at least 52 and probably hundreds more greenstuff bases. And there was often a mounding effect. So the following system has evolved over the course of the year:

I made sculpted green stuff cobbles on a variety of plain bases: 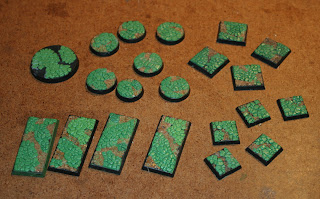 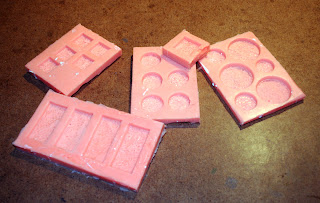 And cast bases using a two part resin (also "smooth on" they came as a kit). Note that when you use this method your castings are slightly smaller than the original. Also there is quite a lot of wasted resin - if you are me - and that the resin bases often need a good sanding on the bottom. 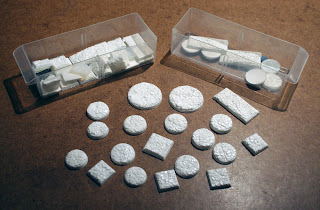 If the model is suitable, and not particularly rare, I'll remove the metal base and pin it to the cast resin base. But this does not work for figures with thin feet, dragging tails etc. So for most figures I leave the original metal base (or most of it) and use a Dremel to rout out an indentation for the metal base to sit inside the resin base. 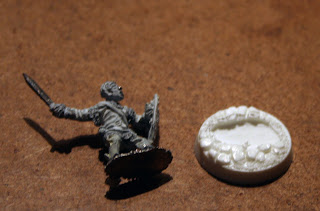 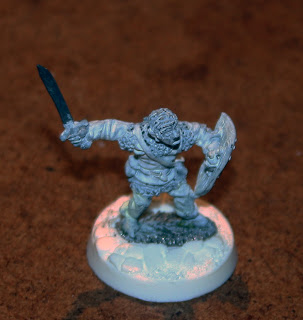 Then I use green stuff and sand to repair the cobble look. OK it is just has time consuming as when I started but it looks better and there are no mounds. 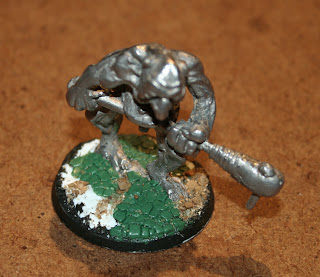 My bases are painted with dark brown, the cobble stones get two coats of P3 hammerfall khaki, and the sand is dry-brushed with earth brown. Then they get a generous coating of Citadel devlan mud wash, after which I pick out some highlights and hit them with figure flat. 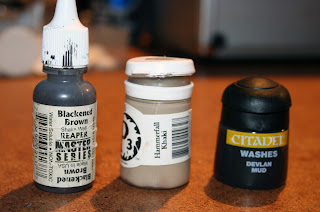 All of the bases also get some additional treatment - static grass, rocks, twigs, leaves etc. to reflect the creatures habitat. 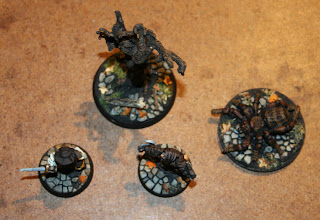 He is a progress shot of the whole project to date. The upper shelf are completed. Overall I've probably spent nearly as much time basing as I have painting - but at least the bases are nearly all done. 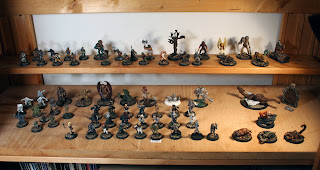 Finished these this weekend - with the exception of base details - But there are five of them so I'm maintaining my resolution requirements. Simple color scheme I know but I'm very pleased with the NMM - contrast does appear to be the key. 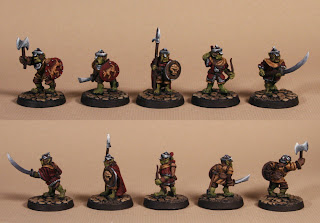 FF series Goblins
When I got my first miniatures in the early 80's I quickly painted the C series orcs in a rich ocher brown, gnolls were tan, red orcs were of course dark red (probably some Humbrol Napoleonic color), but my goblins were always green. Nearly all of these figs got hasty green repaints when they were later pressed into service as warhammer regiments - but most are now lying neatly lined up in trays, stripped and ready to paint again. They will be getting their original colors and identities back.

The Savage Sword of FA9

FA9-1: Its difficult to paint any barbarian with this kind of haircut and not recall the work of Frazetta, Boris, and everyone who did covers for The Savage Sword of Conan comic. So we have to have a girl in the scene and who better than FA20 - Houri with dagger. I have some Frazetta books and looking though them recently marveled at his use of colored light - green and purple hitting skin tones that set such great moods. For a set piece or diorama one could duplicate that style but for for the average single fig maybe not so much. 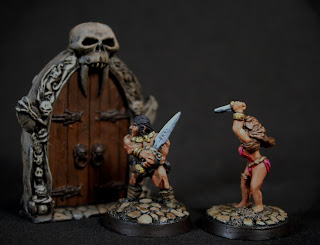 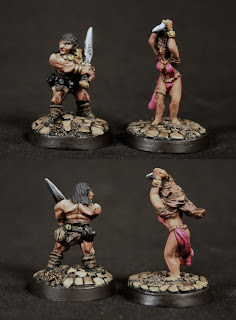 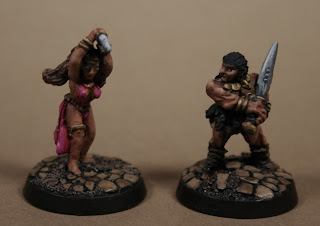 I'm already regretting the pink - maybe I'll change it to a nice bright teal or something
Cheers
Caius
Posted by Caius at 8:21 PM 2 comments: